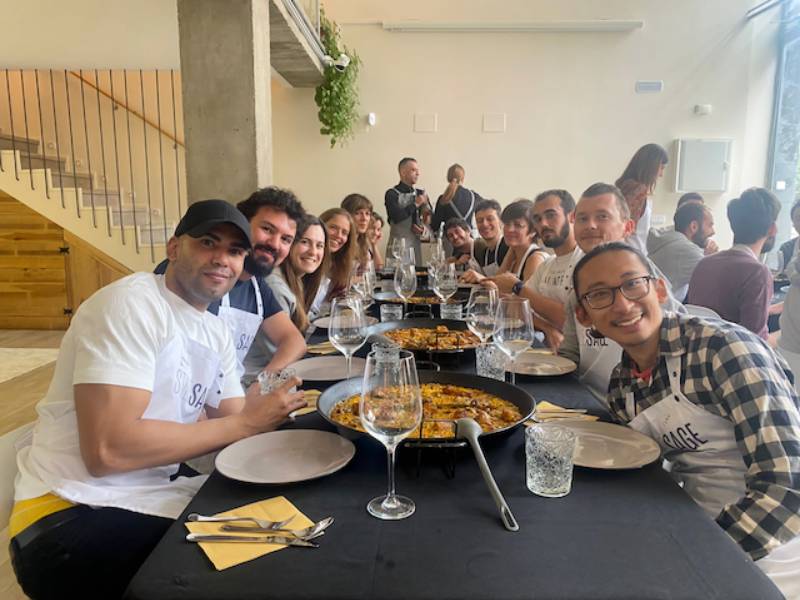 StyleSage is a start-up on a global scale within the textile and fashion industries. It’s often been referred to as “The Bloomberg of fashion” because their platform analyses over 35k of brands and easily over 35 million products daily 😮. As you can imagine, they work with high volumes of data, but they never deviate from their mission: to help retailers and leading brands (H&M, Zalando, ASOS, etc.) make critical decisions about the season’s new fashions. So, buckle up and let’s dive into a real technological challenge! 🚀

At this time, they’re on the hunt for a new roomie who’ll work as a Frontend Developer, with sound knowledge of JavaScript and Vue.js and who’s not afraid of working in the backend too (Python, Django, SQL).

Before telling you about “What you’ll do”, I just want to give you a bit more context:

The team at StyleSage consider themselves as “freaks who are passionate about data with a penchant for fashion”. They’re clear about the value they can add to the industry through their unique use of data analysis. They’re growing rapidly, and they’ve emerged stronger out of the past year of the pandemic due to the boom in e-commerce.

The co-founders, Jade Huang (USA, current CEO) and Robert Figiel (Germany, current CTO), met each other during their MBA studies at INSEAD in Singapore, where they came up with their business idea. Upon finishing the MBA, Jade returned to New York and Rob set himself up in Madrid for personal reasons. He started to recruit the tech team. The rest is history 🚀.

Every day, their databases are updated with information from their clients on hundreds of thousands of products. Some of the leading fashion houses worldwide need to be able to access that info in a quick, simple and powerful way.

As a result, they’ve created a web application to visualise data in an interactive way which allows them to gain an overview of the status of all the fashion markets worldwide, right down to the details of a specific product. Here are a couple of images to show you: 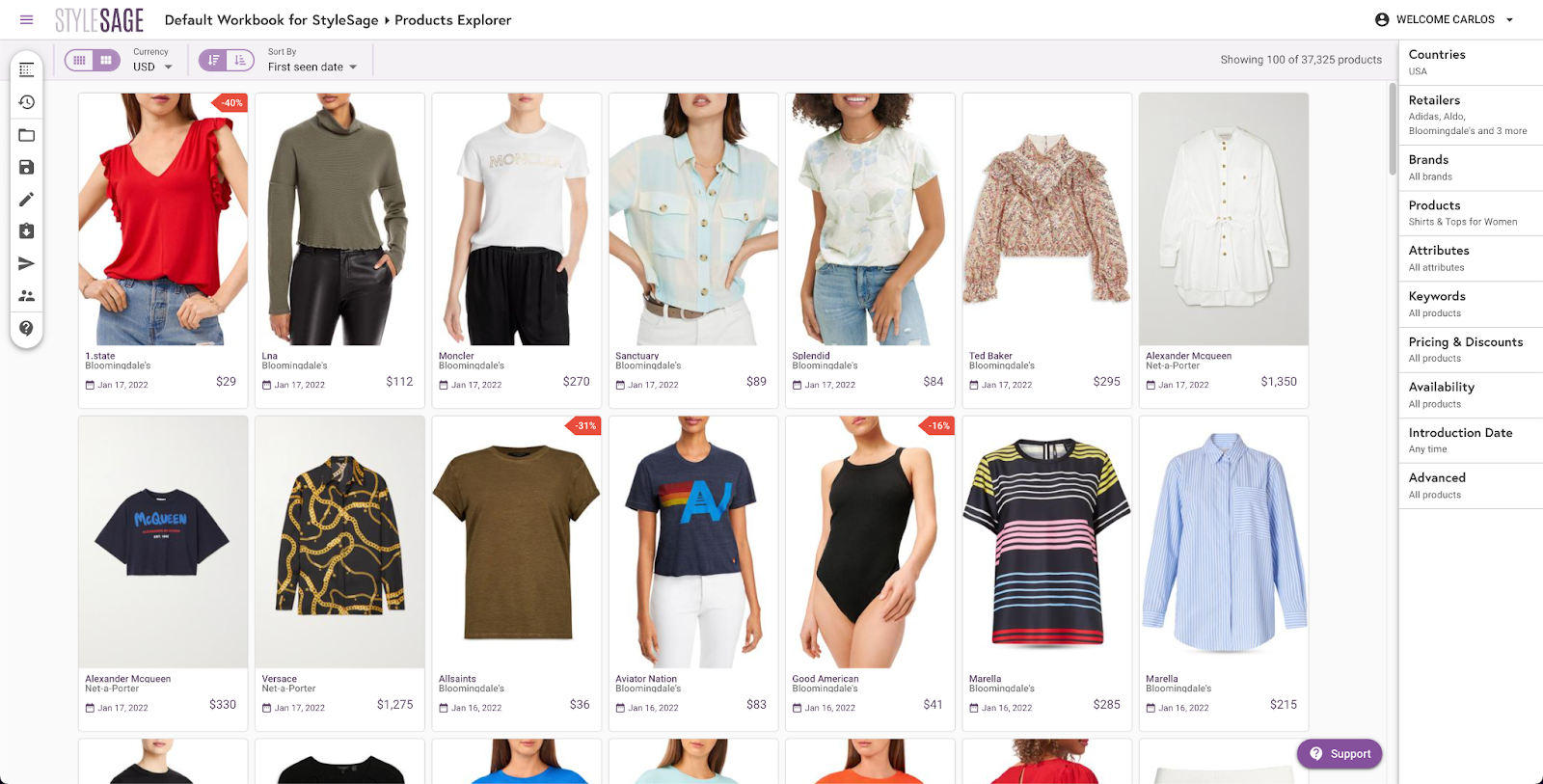 They use technologies like Exasol for their database and D3.js for visualisation, so their clients can perform an analysis on millions of data almost instantaneously. Here you can take a peek at a full stack that the team uses

Not only that, but they also compile and provide other relevant data on the fashion market, such as newsletters, discounts, trends and influencers.

On day one, you’ll have breakfast with your team workmates, and you’ll get your laptop ready (platform of choice, Mac or Linux recommended) to start work.

Your first task will be to add your own photo to the website, which will help you to familiarise yourself with the team’s coding style and the tools they use, plus you’ll send your first deployment to production, which certainly won’t be the last.

For the first few days and beyond, you’ll be developing new features and solving some small bugs on the platform.

You’ll also start to get to know the other teams in the company, both the tech teams in Madrid and the business teams in New York.

At StyleSage, they have a really compact and versatile team. They expect every team member to pitch in with their work, knowledge and initiative. All the systems are interrelated and the work of one team substantially impacts on the work of the other teams. It’s important to have that overview.

For internal learning, they host weekly in-house chats that they call “Monday Bananas”, even though they do them on Thursdays 😂 😂. You’ll see why as there’s a story behind it. Initially they were held on Monday afternoons, and someone suggested that they accompany them with croissants and biscuits. After several weeks, it became clear that they needed a healthier alternative to keep the team healthy, so they swapped them for fruit (mainly bananas 🍌🍌). Then, for organisational reasons, they changed to holding the meetings on Thursdays, but they kept the name.

In terms of the methodology, they’re not really purists, but they do have some really clear software development principles:

Flexi hours: there’s no set rules. They expect you to attend team meetings and for others to know when they can find you working. They adapt so that everyone’s personal obligations are compatible with doing a large job together.

This job is 100% remote working, so as long as you have a good Internet connection, you can work from anywhere (within Spain, due to tax and administrative reasons). They also have a coworking office run by GlueWork next to the Avenida de América interchange in Madrid, for whenever you want to stop by, see your workmates or simply to work more comfortably. 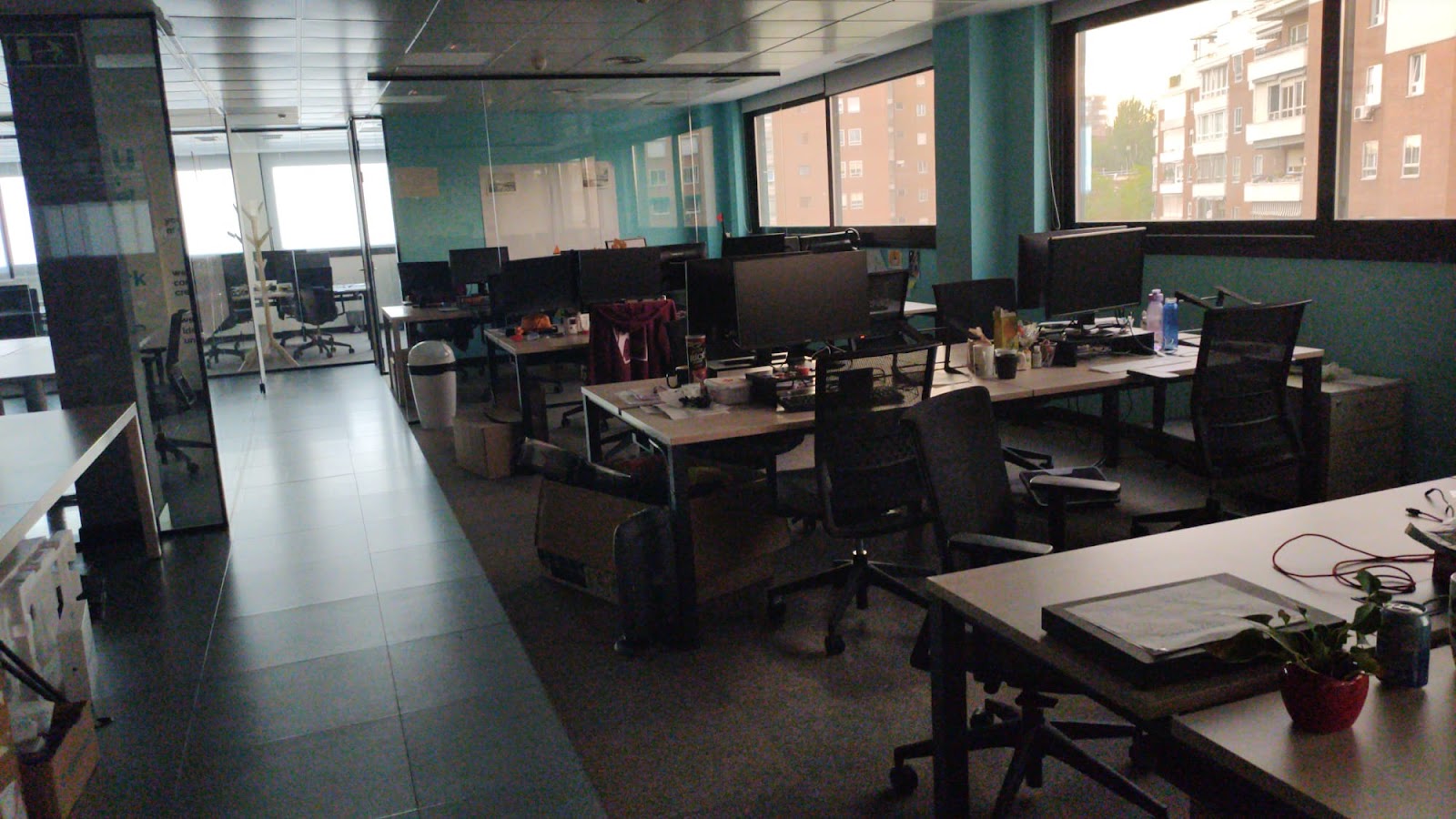 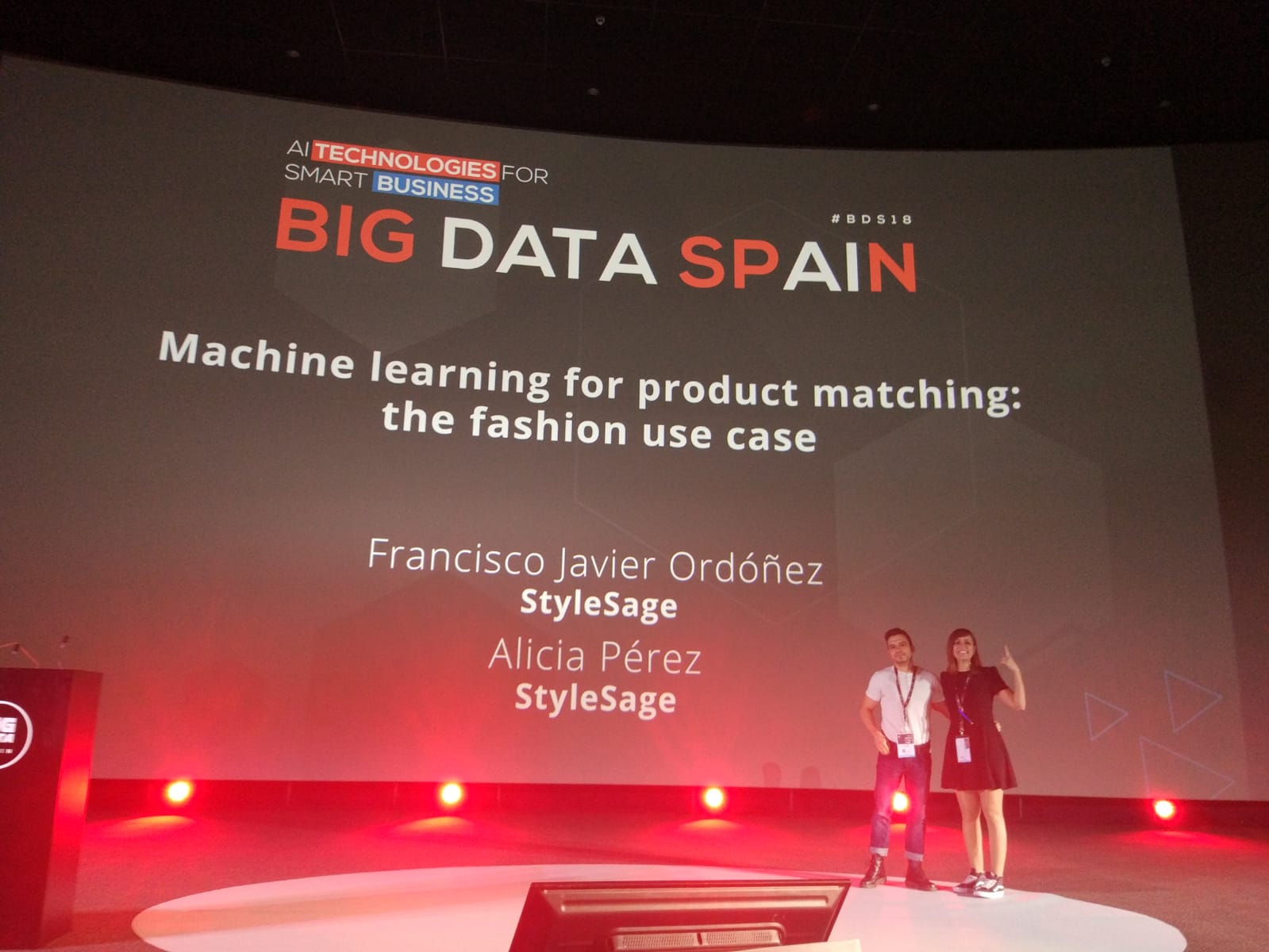 Within the Product Engineering group, you’ll work hand in hand with the following people:

Carlos Vázquez: Product Engineering Team Lead. He graduated in Software Engineering in Madrid 7 years ago and, since then, he’s been playing with the frontend and backend using various technologies. Happily, he’s been at StyleSage for almost two years now, and it’s easy to spot him on a terrace criticising any paella that’s made outside of Valencia or rollerblading in Madrid Río Park.

Juan Menchero: a graduate in Computer Sciences Engineering from the Autonomous University of Madrid, he then studied Big Data and Artificial Intelligence at the University of Bergen in Norway. He started in the frontend world 5 years ago but his curiosity for the backend quickly grew, as well as everything from the architecture in projects that they ran for making stock market predictions to the analysis of geospatial info. He changes his evening hobbies roughly every three months but, as with any true Galician, his passion for nature remains a constant.

Here are a few other workmates from other teams:

Javier Abadía: as the VP of Engineering, he’s worked in different technical and management roles for the past 20+ years; leading teams, waxing lyrical on SIG, writing software for fighter jets... He dreams of software with 0 bugs, testing in paranoid mode, automation, agile methodologies and teamworking. Since joining StyleSage over 6 years ago, he’s been entertaining himself with the best big data analytics and visualization platform that’s ever been built (or nearly). A Computer Engineer graduate from the University of Zaragoza and MBA from the IE Business School. He can often be seen giving lectures at PyConEs, CommitConf, Codemotion, Madrid VueJS, Python Madrid and circuit soirées. He also loves rollerblading, skiing and hiking in the mountains.

Alicia Pérez: from La Mancha, she’s a graduate in Computer Sciences Engineering from the Complutense University of Madrid. She worked for many years on consultancy projects for large clients such as Repsol and Canal de Isabel II, until she moved into the start-up world over 5 years ago. As well as being a Data Scientist at StyleSage, she’s a co-organiser of PyLadies Madrid and she mentors in various programmes that encourage diversity in technology fields such as DjangoGirls, TechShessions and Adalab. In what little free time her cats give her, she has time left over for a few hobbies: skating, painting, paddleboarding, restoration projects... And whatever else she stopped doing during the pandemic.

Beatriz Gómez: a Data Scientist at StyleSage for the past 2 and a half years, she’s now in charge of Product Matching. They develop practically all of the logic side on Python and the IA part on Keras and TensorFlow. She studied telecommunications in Cuenca and, when she finished her degree (2015), she came to Madrid to do a Master’s in Artificial Vision systems, which was where she decided she wanted to specialise in artificial intelligence. Away from StyleSage, she likes to go for walks, enjoying time on terraces, reading, discovering Madrid, playing sports... Let’s face it, she’s a restless soul.

Héctor Pablos: Product Engineering Team Lead. He studied Software Engineering in Valladolid and worked there for various years for consultancy firms on government and banking projects using all types of technologies. Five years ago, he turned his life around and joined StyleSage in Madrid, where he’s led numerous teams until he moved to the Backend team. In his spare time, he’ll usually be found at a gig or a music festival.

Joaquín Bernal: Another multi-functional team member, he’s been a Full-Stack Engineer in the Product team, spent his dark past in the Backend and currently leads the Data Collection team. Born in La Mancha 47 years ago. At the age of 11, he gave his parents so much agro that they ended up buying him a Spectrum: that was his first foray into programming. He spent time working for consultancy firms and production companies until he found StyleSage, where he’s been for almost three years now. There, he programs in Python and JavaScript (Django, Vue, d3...) and he says he gets his kicks out of it. Outside of work, he likes to write fiction, paint with watercolours and many other things (including croquetas, which he loves a lot).

Robert Figiel: CTO and Co-founder of StyleSage. He studied Industrial Engineering in Berlin and Atlanta, with specialisations in Statistics, IT and Business Administration. During university, Robert worked at a cancer research centre, developing software to automatically detect cancerous structures in 3D MRI scans. As a consultant at McKinsey, Robert worked on a huge variety of projects on processes and logistics in Europe and Africa. He did an MBA at INSEAD in Singapore, where he met Jade who convinced him to found StyleSage in 2013. Proud to be a citizen of the world, he loves travelling (he’s visited 50+ countries). He speaks 5 languages and has lived and worked in 9 countries before falling head over heels in love with Madrid for its people, sunshine and jamón.

You’ll also work side by side with other teams such as Product Management and Customer Success who are located outside of Spain, so it’s important that you can speak English with ease.

Apart from the years of experience that you can contribute, they’re looking for a person who’s familiar with how all the cogs of frontend development mesh together:

And if you want to go for a high mark?

📡 100% remote working, but always with the option to visit the office in Madrid whenever you want.

💰 €60/month to compensate for remote working.

💻 Necessary equipment so you can work comfortably (laptop with MacOSX or Linux, monitor).

🍲 2.5 days a year to attend conferences.

You won’t get bored!

At the moment, no, they can only recruit within Spain due to administrative reasons.

Normally, their recruitment process runs in 3 phases: initial interview, technical test and a chat with Robert, the CTO.

NO. They arrange in-person meetings every 3-4 months in Madrid or its surrounding areas and it’d be awesome if you could come and bond. 🍍

They love organising activities together from time to time (although since COVID they’ve not been able to host that many):